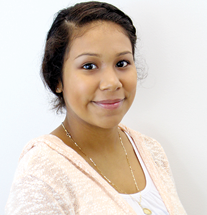 Estefani Olguin-Castillo, affectionately called “Funny” by her friends, graduated from KIPP Houston in 2015. Currently she’s attending the University of Houston’s Main Campus. She’s studying Political Science and Law Values & Policy in preparation to go to law school. After school she wants to work at a small law firm dealing in civil law, since she doesn’t want the pressure of a large firm. Estefani hopes to use her career to improve people’s lives. She has no interest in making a big name for herself as long as she is able to help others. In the long run, Estefani dreams of opening a shelter for women who have been domestically abused.

As a relatively shy person, Estefani is using this internship as an opportunity to branch out and begin to overcome her tendency toward shyness. She wants to become comfortable talking to new people and improve her communication skills, both of which she believes will be very important later in her life as a lawyer. She has also realized through this internship how much our school system could be improved, and she wants to use her training in the law to help make those changes for the sake of future generations.

Estefani is only four feet, nine inches tall, but she laughs because she’s actually one of the tallest women on her dad’s side of the family. Some of them are about four feet, four inches or four feet, five inches.